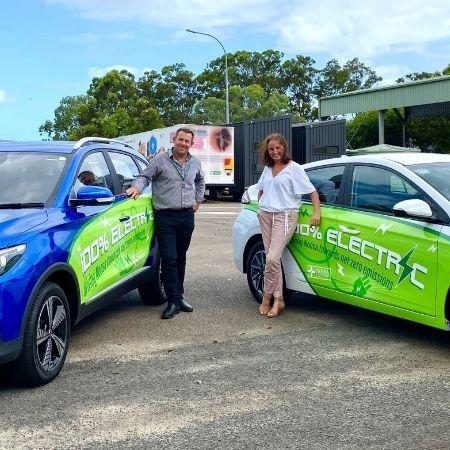 Noosa Council has introduced two electric vehicles into their fleet, driving their way towards zero-emission goals.

The council is welcoming a new Hyundai IONIQ and MG ZS, vehicles which will be replacing a diesel-powered ute and standard petrol-powered car.

The EV’s will be powered by solar systems attached to the Tewantin admin building and Noosaville depot, ensuring the charging stations use renewable energy to further their commitment to zero-emissions.

“We’re excited to trial the two new vehicles, with the possibility of replacing further fleet vehicles with electric vehicles (EVs) in the next budget,” says Fleet Coordinator Geoff Archer.

“With each of Council’s 85 vehicles clocking up around 20,000 kilometres annually, replacing two of the fossil fuel-powered vehicles with EVs will help reduce our emissions.”

Council’s Carbon Reduction Project Officer Annie Nolan said Council was pleased to lead by example with the transition to EVs.

“Electric vehicles are becoming an affordable alternative to fossil fuel cars as well as being better for the environment,”

“EVs are one of the many avenues we’re pleased to pursue as we embark on our exciting journey toward net-zero emissions by 2026.”