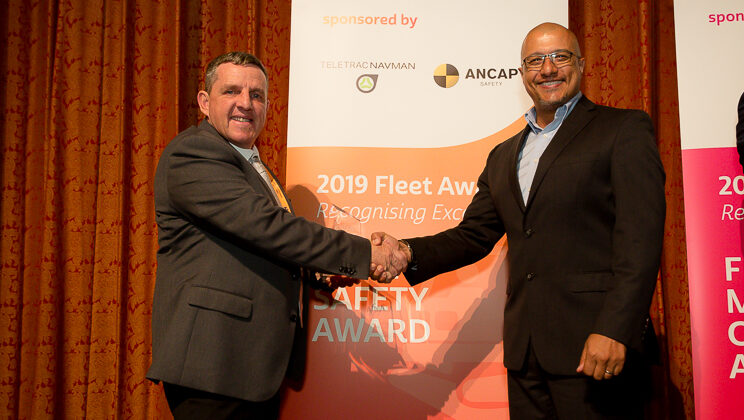 It is with great pleasure that we announce New Zealand Racing Board as AfMA’s 2018/19 Fleet Safety Award Winner. The honour was proudly accepted by Richard Owen, Regional Operations Manager at AfMA’s Fleet Networking Dinner and Awards night.

“Winning the safety award for New Zealand Racing Board is something really phenomenal, and it’s something that we’ve really strived for as an organisation,” Richard said.

“Implementing results was a bit of a challenge, and we knew it was going to be – especially in terms of changing the culture of driver behaviour with our teams.”

Richard noted that the change has been incremental, but improvement has come through two key changes across the organisation.

“These results have largely been a result of the installation of the Navman systems, and the overall buy-in from the team – without those two factors we would never have been able to make the changes that we have,” he said.

Since the implementation of these new measures NZRB has seen safer driving habits, more fuel-efficient vehicle selection and reduced travel distances (170,000 km per annum) across the fleet to improve overall safety. The flow on effects of this has been significant fuel reductions (reduced from 556K litres to 336k litres) across the organisation.

Key to the change was a reliance on improved safety and greater education for drivers according to the organisation’s former Health and Safety Manager Jason Stapp.

“The main driver behind this program was in reducing the risk of harm occurring to our staff, other road users, and the NZRB as no one wanted to have to knock a door tell them their loved ones were either injured or worse “not coming home” – an unforgivable scenario in our eyes,” Jason said.

“We recognise that the journey is about cultural change in the individual drivers and as an organisation in committing to our employees through continued engagement throughout the implementation journey.”

The measures NZRB have implemented have allowed them to gain foresight in predicting potential trends including peak risk times for poor driving behaviour and to develop key strategies to reduce fatigue and burnout from their drivers. Congratulations to NZRB on leading proactive change and making safety a number-one priority!

AfMA would like to acknowledge its official sponsor of the 2018/19 Fleet Manager of the Year, Teletrac Navman & ANCAP Safety.